AR-711 is a fully human immunoglobulin 1, or IgG1, monoclonal antibody discovered from screening the antibody secreting B-cells of convalescent COVID-19 patients. AR-711 is shown to be effective in prophylactic as well as therapeutic treatment modes in a SARS-CoV-2 viral challenge study. AR-711 is being developed as an inhaled, self-administered treatment for non-hospitalized patients suffering from mild to moderate COVID-19. AR-711 is also one the two mAbs in the company’s AR-701 mAb cocktail, which is a separate program being developed as an intravenous treatment of moderate to severe, hospitalized COVID-19 patients.

AR-711 is directed against the conserved receptor-binding domain (RBD) region of the original SARS-CoV2 virus and its newly emerging variants, including the currently prevalent strain G614.
AR-711 is engineered to be long-acting in blood for up to six to six to twelve12 months.

In the animal challenge study, golden Syrian hamsters were pre-infected with SARS-CoV-2 before a single inhalation exposure of AR-711 liquid aerosols. AR-711 eliminated detectable SARS-CoV-2 virus at all dose levels tested, with the lowest lung deposited dose of 0.03 mg/kg. The scientific publication can be found at https://www.biorxiv.org/content/10.1101/2020.10.14.339150v1.
AR-711 is stabilized using a proprietary formulation designed to protect the mAb from the physical stresses imparted by commercial nebulizer delivery devices on protein drugs.

An inhalable treatment that can be self-administered using a wide variety of commercially available nebulizers can facilitate broader coverage in non-hospitalized settings and at a scale not achievable using conventional inpatient IV infusion treatments. 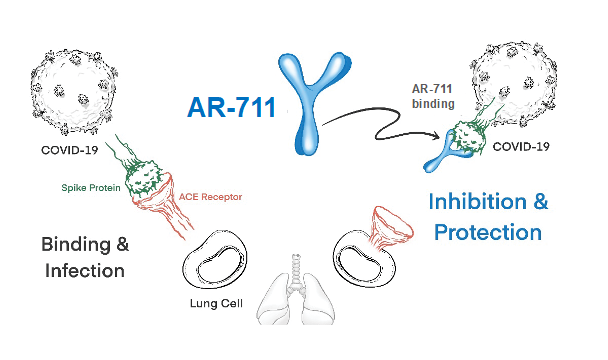